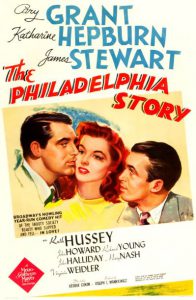 The Philadelphia Story is a romantic comedy with an enduring presence in America’s film history. According to the American Film Institute its number five as one of the most enigmatic and truly profound romantic comedies. To add to it commendation it gave one of Hollywood’s greatest stars, Katherine Hepburn her first big break and eventual first academy award, the first of many. And most critics of films of the Hollywood’s golden age consider it a perfect example of comedy of remarriage.

The 1940 movie was an actual adaption of a 1939 Broadway play of the same title. A story of love between a socialite ex-wife and three men, her ex-husband and to add to the cauldron of drama and chaos the insertion of tabloid magazine journalist on her heels and a her to be husband, business man.. The 112 minutes film was actually inspired by the life and times of Philadelphia Socialite Helen Hope Montgomery the wife of friend of the play writer Philip Barry.

Philadelphia socialites Tracy Lord marries and divorces the very wealthy high standing C.K.K Dexter Haven. Due to his excessive inebriation and her unforgiving nature of the treatment of this both split and go their separate ways. The films starts off at the point when Tracy is about to remarry rich, business man George Kittredge, a worthy fiancé according to all standards. Spy magazine publisher is eager to cover the wedding of the year and finds himself taking on Dexter to help him to get in Liz, a photographer and Mike, a reporter for Spy under the cover that they were Tracy’s estranged brother Junius old friends into the wedding.

Dexter is welcomed with open arms by Tracy’s teenage sister into their home, much to her annoyance. But with time she is taken with the very attractive and capable Mike. The night before the wedding Tracy gets herself drunk and takes an innocent swim with Mike. George sees this and he thinks the worst. And in the morning of the wedding George demands an explanation for the untoward behaviour. She feels insulted by his lack of trust in her and breaks off their engagements. Guests have arrived and Tracy is thoroughly confused of the two, Mike and Dexter to take down the isle.