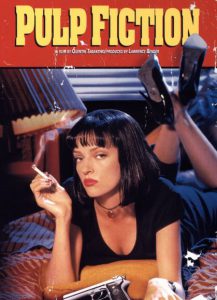 I doubt there is a thirty-something year old in the world who didn’t have this poster on the wall of their university dorm room.

Well, except people who didn’t go to university of course.

And people who grew up in Asia or Africa. Or South America. Or one of the Russian states come to think about it. And if you weren’t into films you probably didn’t have it either.

So – I doubt there is a thirty-something who went to university in a westernised country and was a bit of a movie geek in the world who didn’t have this poster on their dorm room wall.

Although come to think about it, I didn’t see it on many girls’ dorm rooms either. But then again I never really got to see the insides of all that many girls dorm rooms anyway (at least not without climbing up ladders and peeking through windows), so I could be wrong on that one.

Anyway, you get my point. Among a certain demographic this was a extremely popular movie poster.

And ultimately that’s no surprise. It’s one of the most iconic posters there is. It’s a masterclass in stylish marketing and embodies the film perfectly without giving too much away. I love the battered and creased corners and the rich lurid almost seedy colours harking back to the pulp magazines of the first half of the 20th century .

And while I’ve personally always felt Uma Thurman’s beauty to be over rated, resembling as she does a bug eyed Grey alien from the X-Files, at least it didn’t have John Travolta on it. And for that I’ll be eternally grateful.