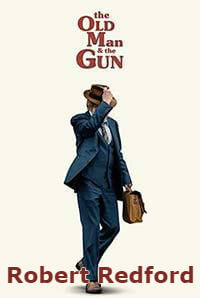 The Last Movie of Robert Redford

With deceptively easy charm and grace, Robert Redford’s swansong is based on the true story of an old man named Forrest Tucker (Robert Redford), who spent most of his adult life in jail, escaping from jail 18 times, with a daring escape from San Quentin prison at the age of 70. Between incarcerations, he robbed banks with thievish friends Waller and Teddy (Tom Waits, Danny Glover) known as the Over-the-Hill Gang. Without any physical violence, the likable and gentlemanly gang raid several banks, confounding both the judicial authorities and enthralling the public.

The focus of the film is a string of heists in the 1980s, with the hero a charmer who does what he does for the sheer thrill of it, evoking the classic thieves and crooks Redford has played over the decades, most memorably Butch Cassidy and the Sundance Kid and Johnny Hooker in “The Sting”. The movie even starts with a caption that tells us this story is “also, mostly true”, a nod to the Sundance Kid fifty years ago which states “most of what follows is true”.

Detective Hunt (Casey Affleck), who quietly admires Tucker’s commitment to his craft, is on the trail of the man who has escaped prison so many times. The montage of escapes in the movie is the highlight, yet for all the risks, Tucker doesn’t steal for the money, but because he’s restless and good at it. The final days of the Over the Hill Gang are framed by two supporting characters. By chance, Tucker meets warm-hearted Jewel (Sissy Spacek), who comes to love him in spite of his chosen profession. These scenes are cinematic gold, capturing something timeless, intangible and effortless.

There is no fast-paced action or high suspense in this leisurely. It’s not needed when you have Redford as the star. Despite the passing of time, he remains a skilful actor and a handsome one, even if his character is neither complex or even fully developed. Whilst his behaviour is barely challenged, it does present some of the other damage caused by his choices, with a memorable cameo by Elisabeth Moss.

Ultimately, this is a delightful story from a cinematic icon, yet it is not a flighty movie, there are lines and characters that, like Redford himself, are unforgettable. It is a fitting finale from the legendary Redford.